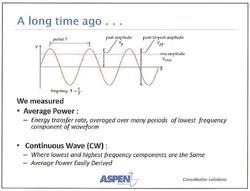 ​Historic Power Measurment
Historically, spectrum were not as crowded as they are today and only the measurement of Average power was really needed.  The waveform was fairly repetitive and so, by today's standards, relatively easy to measure. 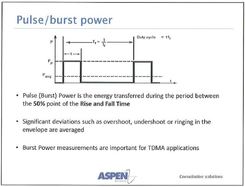 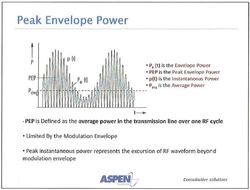 Peak Envelope Power
Once you start to add more modulation, averaging out of the signal is no longer able to provide an accurate view of what's happening on the Transmission Line.  It might be useful as a comparison in order that when it's "good" the average line looks like the blue line (right), but this is not very accurate if your can only use averaging techniques with your sensor. 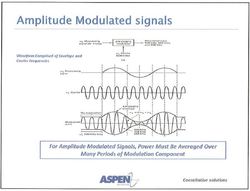 ​Amplitude Modulated Signals
The waveforms become ever more complex as the spectrum becomes ever more crowded.  At this point, averaging becomes almost no help at all, because the information being carried makes the signal vary. 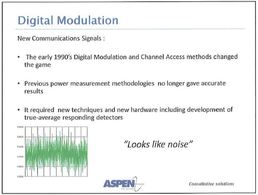 Digial Modulation
Then along came VoIP - digitised voice put over a data network, but it didn't all go over packet switched networks.  Some went over a carrier based network.  The resulting grass, or combined signal just looked like a noise to the uninitiated AND to power sensors that just average what they see, thus a new technique and new hardware was needed. 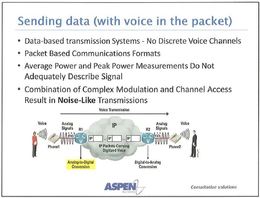 ​Sending Data (with Voice in the Packet)
This is what is regarded as a "Packed Based Network", so depending where in the network you are, you will require very different analysing methods and equipment.  As most of probably have mobile or DECT phones, even this diagram has become largely out of date but the important thing is "no carrier" across the cloud. 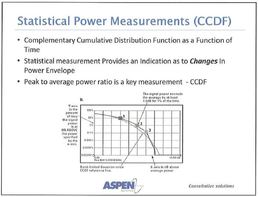 Statistical Power Measurements (CCDF)
To look at a highly modulated signal, CCDF techniques are used, but, it looks at the change in power and describes peak to average ratio, or, to put it another way, it looks at how much of the signal is above average, and by how much, and for what percentage of time.  By definition, most of the signal is "average", except for the spikes of noise.  This counts the spikes and tells you how big they were relative to average. 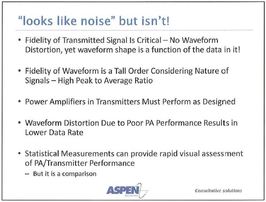 ​Looks like Noise, but Isn't!
The next challenge faced with this type of signal is that it is the content that determines the spikes at any given moment.  So, as the data changes, so does the appearance of the Signal.  But, statistically, the signal will be the same in terms of size and percentage of spikes.  So, a "good" signal from the same source will always look the same, statistically.  Think of this in terms of a motorway with lorries, red cards, green cars, fast cars, slow cars, but statistically it is vehicle/gap/vehicle/gap/vehicle/gap. 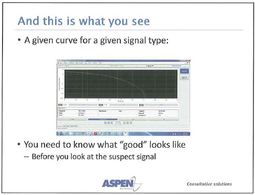 And this is What You See
So, this is what the Bird model 7022 will show and the shape is characteristic of a given signal, and, as I have hinted at, this is a comparison system.  You can take a measurement any time you like and all you are doing is characterising the signal, at a given moment in time.  So, you need to know what "good" looks like, to keep it as a "master" for comparison at a later date. 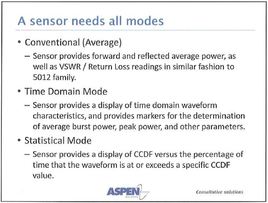 ​A Sensor Needs all Modes
You will also still need all the things you had previously, because CCDF does not replace earlier measuring techniques, rather it adds to them.

A good sensor will do all of these things and allow you to move between views. 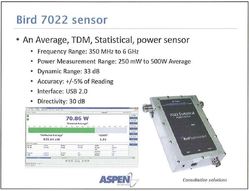 Bird 7022 Sensor
The Bird 7022, the first of it's kind, does all of this when connected to a laptop/PC, running the VP3, Free of Charge Software.  The 7022 has a range from 350MHz to 6GHz.  Here you see "Average" view, looking at forward and reverse power, after all, if the reflected was high, you'd start looking at physical cables and connections. 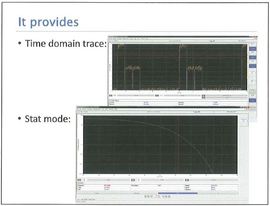 ​It Provides
Then you have the Time Domain Trace, with markers that you can set, and the statistical or CCDF mode.

Statistical Power - A curve of the power level relative to average power in dB and the percentage of time the signal spends above that average power.  This representation of CCDF enables the user to characterise the system and monitor it's degredation over time.  (There is a need to know what "Good" looks like). 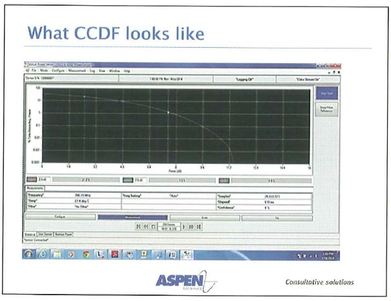 To calculate CCDF, the following steps need to be taken: