Next generation defense electronic systems occupy large information bandwidths to meet demanding mission requirements.
Performance validation of these designs requires extensive testing on the bench, in the chamber and on the range to ensure
system readiness prior to deployment. The IQC91000A was designed to record such modern waveforms and isolate anomalies
that often occur during system integration and real-world validation testing. With its 12 bit fidelity, the IQC91000A can continuously
record 90 minutes of 1000 MHz wide waveforms to ensure designers capture transient and unexpected events. 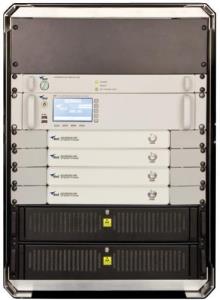 Recording wideband signals involves much more than collecting digital data. The quality of the RF converters, digitizers and
processing tools must be considered in the record and playback approach for engineers to make efficient use of their data set.
Bird employs a holistic approach to ensure users can quickly collect high fidelity signal data and move it into their processing
environments for analysis. Whether you need to record seconds, hours or even days of real-world RF data, the IQC91000A includes
the hardware and analysis tools to get the job done.
​
The IQC91000A was designed to process large data sets of recorded spectrum to understand thenature of wideband waveforms.
Recording 100% of the events of interest gives the engineer forensic evidence of what actually happened in the electromagnetic
domain. Because these recordings contain 100% of the signal content, and not just a visual history, the interfering signals
provide the user with undeniable proof of the signal event and its characteristics. These recordings can also be re-used as signal
sources in margin and stress testing.
Features
© 2019 Aspen Electronics Ltd,
an APC Technology Group plc Company
​About Us  |  Privacy Policy  |  Contact Us